The production of the EP is polished, hits the right melodies, and will hopefully get them a little bit more mainstream radio airplay. 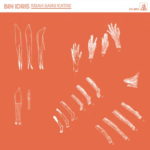