Ali wants you to “Dance, Habibi.” And dance, we did. Meet Ali, a mostly-instrumental three-piece from Jakarta—or have you already met?—featuring familiar names from the Indonesian art and music scene: bassist/artist Arswandaru Cahyo, drummer John Paul Patton of Kelompok Penerbang Roket, and guitarist Kevin Septanto of Elephant Kind.

A little over two months ago, the trio released their debut single “Dance, Habibi”. The thing that captured me then was a sort of settling into the subconscious, a fever dream of ’70s cinematic soul, Afrobeat, disco, and funk, those “mid-east beats” with “south-east twists” of their Instagram bio.

“Downtown Strut” is a fitting follow up: arresting, tumbling, swaggering, more groove than song. Here, the drums are dancefloor-ready; lyrical, near-liquid guitar shimmies around the soporific, strutting bassline; while Arswandaru––and his brother, Abdul Kadir––sings in Arabic about dancing away “beban dan penat”, as told to Hypebeast Indonesia. When the going gets tough, the tough get dancing. 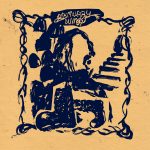