With their debut album “Selamat Tinggal Pujaan” in tow, Masdo have been making waves in the Malaysian mainstream and independent music scenes with their brand of easy listening pop-yeh-yeh / surf-pop sound, constantly packing venues at their live shows. The band recently released their new single, “Dinda”, a song about the challenges of being in a long distance relationship, accompanied by a slick looking music video. 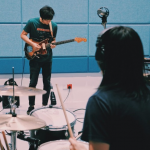