One could consider this heavy psychedelic rock band from Indonesia to be one of the country’s supergroups, because the members of Mooner are made out of several prominent rock bands originating from Bandung which includes The Slave, Sigmun, Sarasvati, and The SIGIT. With their recent sophomore album “O.M” making waves in the region, the band recently released a music video for their single “Kelana” taken from that album. 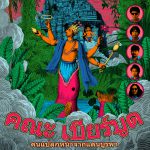