To stand strong in the music scene as a band in Malaysia is not easily achievable by many, struggling through the ups & downs, thick & thin and hustle & bustle. Nonetheless, despite all of the harshful facts of survival, here they are, Seven Collar T-Shirt is still standing tall and strong even after over a decade since their formation.

After numerous years of silence (their last album, The Great Battle, was released in 2009), they’ve jumped back on the ground and present us their new single accompanied with a simple self-explanatory B&W video showcasing the lads themselves donning their respective gears.

Their silence simply generates the boom in the song churning out beautiful melodies and lyrical heart-pours, which doesn’t seem to disappoint their anticipating fans at all, just like what they have always been doing. Here’s one by the guys from Seven Collar T-Shirt, “Ordinary Life”. 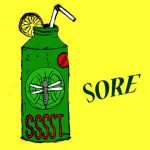 They Will Kill Us All – Future Nights (Dizkopolis Remix)