It’s not a phase, mom; it’s a lifestyle. Three years have passed since Forests’ last album, Spending Eternity In A Japanese Convenience Store, enough time to forget what made the cult-favourite emo trio from Singapore so compelling. But on their third full length Get in Losers, We’re Going to Eternal Damnation, the trio of Darell Laser (bass, vocals), Niki Koh (drums) and Daniel Lim (guitars, vocals) serve up a potent reminder of just that with a hell-raising riot of big choruses, big flourishes, and even bigger feelings.

There’s no time to lose on opener “Fool of Hell”, which glistens with the twinkle of math rock done fast and done loud. The music builds and builds, its dual-guitar interplay and thrilling, pummeling percussion anchoring catchy, sung-screamed left-turn hooks. It’s a great opener and one that sets the tone for the rest of the album.

But it’s the second half where Get in Losers really shines. “Jazz Ruined My Life” brings to mind the bleak image of chugging down “bad news beers” at “the after-party party”, all while Forests flaunt and flex, one-upping melodies with tricky change-ups and technical intricacies. On “Godspeedbaby!”, they permit themselves to slow down; chords twist upward and downward into, at last, a cathartic, swelling sing-along: “Suffering is my favourite colour / It looks good on you / But it looks better on me”.

Forests’ many allusions to love as a thing of damnation and salvation do nothing to stop them pining after—or at the very least, singing about—the girl with “resting peace face”, the “Summer from that movie” to their Tom. From the album’s first line (“All the sweet nothing that you said”) to its last (“You really fucked me up this time and I let you”), the boys are down bad.

Still, even if there isn’t a happy ending, Forests have mastered the art of finding joy in heartbreak and sneaking in some charming wordplay while they’re at it. See, for example, the bright, jangly bop “Value Dollar Fire Sale”, complete with clap-along: “You know I should be charging you / You live in my head rent-free / You know it doesn’t make any dollars and sense baby”.

They’re giddy, they’re goofy, and they never once take themselves too seriously. Make no mistake, though; this is music for simping silly. Get in losers, there’s plenty of space in the back. 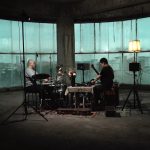