Trophy Knives’ vocalist Vinesh had this to say about the song: “[it’s] an anthem about how … oppression and gaslighting has been so normalised in our day to day lives, and how we should get rid of these rose-coloured glasses that we’ve been wearing and retaliate”.

Check out the music video, directed by Adam Sofian from BSYNC Productions:

“Smokescreen” is the sixth single off their upcoming album Look the Other Way, which the band is releasing themselves in September 2022. 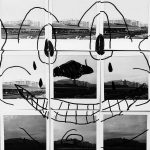