Malaysian experimental artist and former founding member of Akta Angkasa, Dirgahayu, and Kwala Berlumpor, Zulhezan has been publishing a number of acoustic guitar-driven works as of late.

Zulhezan’s rendition puts the song in a totally different light, slightly darker in a way.

Drowned by reverb and layers of effects, he also sings on this track – somewhat a rarity considering his past works. 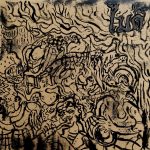