The Charlatans Live In Singapore @ *SCAPE, The Warehouse, 23/11

Britpop legends and survivors (11 albums and still counting!) The Charlatans will be making a very special appearance for all you Britpop fanatics out there in Singapore, courtesy of Topman and the organisers Live Limited and Red Ant Touring. Due to a recent accident involving drummer Jon Brookes, another legend in the form of The Verve drummer Pete Salisbury will be helping them out with the sticks, which should make the prospect even more enticing. Singapore’s very own West Grand Boulevard will be the opening act. 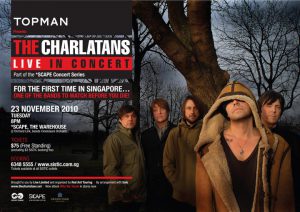 Show starts at 8pm on Tuesday 23rd November 2010 at *SCAPE, The Warehouse, 2 Orchard Link, Singapore. Tickets are standard priced at SG$75, which you can buy from SISTIC.