Arcade Fire’s new album ‘The Suburbs’ seem to carry with it themes of childhood memories and pasts. The songs themselves of course are beautiful and so generally reflective in their own rights, but with them, strong and evocative creative works come with, like their brilliant new ‘The Suburbs’ video, directed  by Spike Jonze. But, if you’re the sort of person that find traditional music videos to be boring(let’s face it, it’s the era of ‘The Hills’) or if you don’t really get Jonze’s video or didn’t really “see yourself” in it, do watch Chris Milk’s HTML5 video titled ‘The Wilderness Downtown’, played to Arcade Fire’s  ‘We Used To Wait’.

By keying in your childhood home’s address, Google Maps will customize the video to include images of your neighborhood streets in the video. You would need Google Maps to have street views of your location, though. If it doesn’t, put in any other address that does anyway to checkout a whole new internet experience and an invitingly interactive music video. We’re talking about choreographed windows popping up, birds flocking and moving according to the movement of your mouse and an insight to cool new technology and new possibilities for creative works. 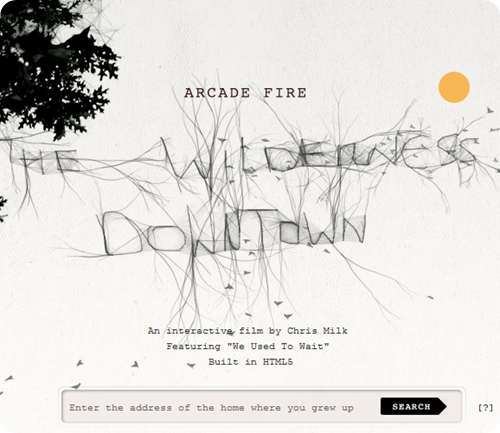 Only viewable with Google Chrome.Make sure you’ve got that swift new high speed internet connection too. Checked? Head to www.thewildernessdowntown.com now!