The past 2 weeks has seen Malaysians going all ga-ga and nationalistic over our new big budget Hollywood wannabe epic Hikayat Merong Mahawangsa, which is fair enough since we rarely see these kinds of films being made here anyway. But today, another ‘rare’ kind of film opens in Malaysian cinemas, touted as the first openly gay film (or maybe more correctly, the first open depiction of a gay relationship) to get a wide release in Malaysia. 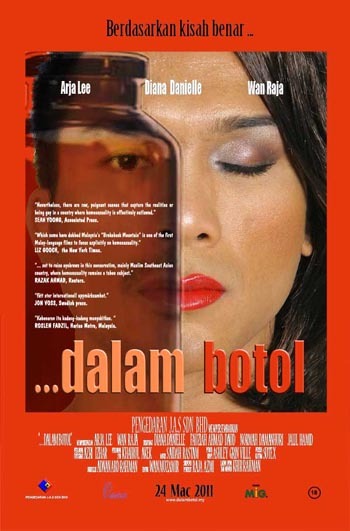 Directed by Khir Rahman (an actor you’ll always see in Malaysian films and TV dramas) and produced by the publicity genius Raja Azmi, “… Dalam Botol” (originally titled Anu Dalam Botol) tells the story of Ruby (or Rubidin, before his sex change operation) and his journey from being a man loving another man, then changing to become a woman because of that love, and afterwards unexpectedly falling in love with a woman. And from the trailer, it doesn’t look like it’ll be one of those trashy Malay movies that we all fear and hate, so we definitely can’t wait to go see it. Check out the trailer below, and let’s all go show some support to a Malaysian movie that tries to do something different.